You are here: Home › ART 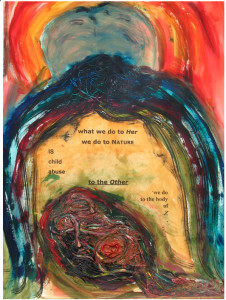 What we Do to Her
2’x3′ Ink, water colors, metal flakes, plastics, on paper

Campion’s Art moves through the concerns of idea, music,  and image to produce a polyvalent, polymorphous, endosymbiogenetic, ecotropic art, he calls Texturals.  He often begins with his Poetry and proceeds to flesh out and embody that work using inks, oils, water colors, mixed media, etc. Most often these are placed on home made papers. You can see a number of these on this page. But additionally, they can be seen on nearly every page of this site.

Now, take a look at a slide show of this work on ArtSlant. The site also shows a one-person show he had at the University of California at Berkeley:

Texturals from the Medusa, A Walking Book

You can also look at the sub tabs under Texturals from the Meduas: A Walking Book, a one-person show at UC Berkeley, Worth-Ryder Gallery.

You can also check under the sub tab on the COLLABORATION PAGE to see some images from: Floodstage at the Memory Theatre—a collaborative effort with sculptor T. J. Mabrey and composer Edmund Campion—exploring the ecotropic relationship between the sky and the earth.  The work presented models of the precession of the equinox as it is presented in ancient astronomy and myth. (Hamlet’s Mill). The installation became a minor cause celebre when it was initially censured and closed for some of the content in Campion’s Texturals. The ACLU’s successful effort to force the show to reopen is documented in The Americans’ for Freedoms publication on censorship in the U.S. The work was present twice—in a community just North of Austin, TX and at College Station on the Texas A and M campus, where it won the prize for the best art show of that year. 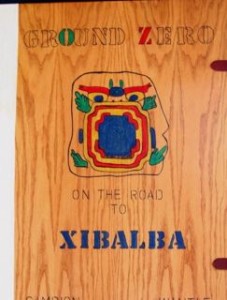 Ground Zero: On the Road to Xibalba
by John Campion and Paul Wintle

Campion made a large book (4′ x 3′) of illustrated man-hole covers (with Paul Wintle ) entitle Ground Zero on the Road to Xibalba. The book is taken from charcoal rubbings of covers from an old street in Austin, Tx and tells the story of the underworld (the repressed) of modern day society. Take a look at it under the sub tab, Ground Zero on the Road to Xibalba (under the main Art menu tab.