You are here: Home › ESSAYS 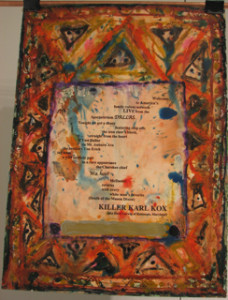 Campion has written a number of essays, fragments of which are sometimes found in his book-length poems. Here a some you can  open as PDF files.

1.) Discovering and Composing with Logos

This essay is concerned with music and text collaboration and with the problem of IDEA in music.

Discovering and Composing with Logos

2.) Gnomae from the Tao Te John

This text brings together some of my favorite aphorisms.

Gnomae from the Tao Te JOHN

I wrote this short piece about the fear that was put on me as a child–the fear of nuclear annihilation. It was published in Ghosting Atoms, a volume produced by UC Berkeley and concerned with the history and effects of the atomic bomb.

In the Wake of the Bomb

4.) Some Notes on the Proscenium

This essay reflects some thoughts on that peculiar instrument.

The following is a guide for better reading skills and appeared in The Folio, UC Berkeley, 2012

Thirteen Ways of Looking at It

6.) Biography: From Where Three Roads Meet

You can find this piece, which appeared in the volume by the same name, on the Sub- Tab of the John Campion: HOME PAGE.