You are here: Home › POETRY 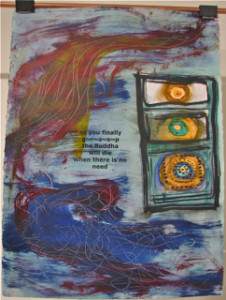 Campion’s poetry forms the backbone of all of his work, and its means of presentation has been called a kind of landscape architecture of the page. Emerging from an ecotropic understanding of the world, his practice is alchemical, polyvalent in its articulations, and polymorphous along its shape-shifting paths. The poetry moves, like the world, along lines of flight forming new associations and coherences. These interact and nest within others: folding infolding refolding unfolding.

*NOTE
(Click under the specific subtab heading under the mainhead POETRY for more information about each specific book, Tongue Stones, Squaring the Circle, Medusa, and Consilience.) You can also read some selections from other poetry works, [not one of the four book-length books of poems] at the lower end of this page.

Four book-length poems from a projected series of five scaffold the cosmology of his art .

Tongue Stones
At 290 pages, Tongue Stones—the first in the anticipated quincunx seeks to unravel the mystery of our bad relations with ‘Others’ and with the Earth itself through a decoding of the language of the mythic past (Austin Book Award and The Violet Crown Award). You can listen to a small selection of the text from Tongue Stones in his music collaboration with composer Edmund Campion in the works entitled L’autre and SPELL respectively.

Squaring the Circle
Squaring the Circle, 216 pages—through the lens of a cosmological memory theatre, this text examines the effects of the conquest of the Americas and realizes the conquest of the entire planet (Blue-Star Foundation Award). You can listen to Campion reading from a lengthy selection from Squaring the Circle in the following link. This selection is taken from a live collaborative performance work with composer Edmund Campion entitled Name Calling, which was performed at the Chapel of the Chimes in Oakland, CA. You can read more about it in the Sub-Tab under COLLABORATIONS.

Medusa
The third book in the series, * Medusa ( See the menu subtab to read the entire poem), 213 pages—here the ancient myth finds contemporary expression, as “Everyman” (suffering in a world of political surveillance and disconnection) discovers himself in psychotherapy for transgressions against ‘women’, ‘the other’, and the ‘earth’.

Check out a video of Campion’s saga of reading the entire text of Medusa at The Center for New Music and Audio Tecnologies (CNMAT) at UC Berkeley:

Consilience
Now after a year in South America, two more teaching, and a year in The Netherlands, Campion announces the publication (Winter 2018) of the fourth in the series, Consilience, 294 pages. This transpersonal travel book exploits some new understanding about the self in the context of Deleuze and Guattari’s assemblage theory and some scientific work regarding emergence. Here Campion develops his effort to create a more ecotropic language–better suited to examine the coextensive interrelationship between culture and ecology. 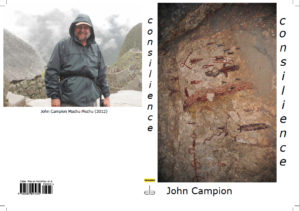 (Note: You can buy any of the four book-length books above by sending 25.00 to Ecotropic Works/3142 Sylvan Avenue/Oakland CA 9402.

Check out more info on how to make purchases by reading How to buy books under John Campion on the Home page.) Additionally, these four texts and some of Campion’s other books, Where Three Roads Meet, Sippapu the Kiva an Inverted Bat, Ecotropic Works, Pangaea, El Sueño, and Swing Low, are available through various Libraries.)

Below are a series of readings (YouTube) from his faculty participation at UC Berkeley in the prestigious Holloway Series.

OTHER POEMS–Selections
You can read a few short selections of his poems below in PDF form.

The following link contains a poem (Five Flashes of Light) that was published in Ghosting Atoms, UC Berkeely, 2005. The volume was concerned with the history and effects of the atomic bomb.

The following link contains a poem (Tigris and Euphrates) that was published in Terrain, a journal of the built and natural environments, Berkeley, 2010

These poems were published in Pangaea and Periplum. Some appear in my books Squaring the Circle and in Medusa (which you may examine in the Sub tab).

These next poems appear in Medusa.

To rivet the ole Phoenix

The next two poems is are Texturals. The first one I did for Floodstage at the Memory Theatre.

This following poem was dedicated to Steven Feld after his work on the Kalluli people.

This next poem appears in Squaring the Circle. It was also published in Samsara.

The following work was written as an extension of a Medusa poem on the occasion of a wedding.

These poems were written for and performed at the Tempo Festival in Berkeley by the poem. His brother Edmund Campion performed and composed the music.

The following poem was written at an in honor of the garden on the island at Ischia, where I spent the summer of 2006.

Some of Campion’s poetry has been used in important works of collaboration. Click on each Sub-Tab under the COLLABORATION PAGE to find some examples .