You are here: Home › JOHN CAMPION › Biography: From Where Three Roads Meet

From Where Three Roads Meet 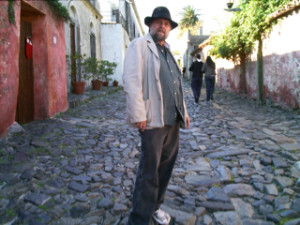 My work has been thrown from the windows of Prague. I grew up with the slur “bohunk” incomprehensibly lodged in my American throat; though in truth, my mother’s family were Moravian, and their complaints of immigrant bashing seemed a bit far-fetched to me. My great-grandfather, Alois Polansky, allegedly invented a cure for tuberculosis from the herbs of the motherland, and his Paracelsian legend lives in me. In my mother’s line (at 85 she still lives in the house she was born in)* I am connected to the great Czech intellectuals who made the land a bastion for magic, cabala, astrology, memory, and all the hermetic arts. They are the alchemists of my poetic tree. But neither the story of a people nor a poet is simple.

My father’s family is Irish but can be tracked to the England of the poet/composer Thomas Campion and (my brother Edmund inherited all the musical genius and was named for) the braggart Blessed Edmund Campion. After many years of pious service (in the form of free accounting work) for the Jesuits, my father was rewarded by Pope John XXIII with a relic of the Catholic Blessed. The holy martyr was fully sanctified by Pope John Paul II, whom my mother and brother met in 1992. The family probably came from Italy and Spain (which helps to explain my passion for Spain and Latin America and the fact that Edmund is currently living in Rome). According to Partridge, the name means field and originates from the Hittite word “kanza” which means grass. A friend reminds me of a line in one of my books, “Like the cows we live on the grass.”  Certainly my interest in agriculture and in nature generally is bound up with my father’s name.

I emerged from the storm of these two families of Catholics and hermetic puritans, whose past mirrors the political, historical, and intellectual conflicts of the west. Prague has always suffered both internally and externally for its tolerance. On at least two occasions the town suffered a defenestration; literally key figures were thrown from a window.

Internally, liberal and reactionary elements have fought for control. By the time this struggle reached America,  the liberals would be called Transcendentalists and nature lovers, and the reactionaries would be called Puritans, Protestants, and defenders of the rights of the individual. Externally, the Jesuits, who were sympathetic to the hermetica, saw themselves as defenders of right thinking, much like the Stalinists of our time. Part of the broader context of the defenestration, they invaded and took over all of Bohemia. Descartes was part of the takeover. The age of science acting in conjunction with art was dead. The age of science operating at behest of private property was born–from it came the romantic rise of the individual and with it hatred for the communal. This notion of reason would herald a revolution in industry and bring us in the west into a tragic conflict with the unconscious, women, the other, and ultimately with nature herself.

This apparently unreconcilable division is the subject of my poetry. Nevertheless, I have always felt a tinge of alchemy in the Catholic understanding of transubstantiation of the Eucharist, and from this I believe I derive my deepest understanding of ecology–all forces are in relation and all things are apart of other things. Moreover, in the Catholic Virgin and Saints, I see a vestige of the ancient Mother and the polytheistic Gods of nature.

I was born of Catholic parents in the vortex of an East Dallas full of rugged individualists–mainly cheap labor brought in from East Texas to work at the Ford plant. Over time the environment of the neighborhood was as debased as the currency of these workers. Everywhere, the interests of capital began to eat at nature and in its wake followed an indescribable emptiness and ugliness. Always, progress and the liberty of the private citizen were used as an excuse. Even as a child I could sense the double lie. All about as the air and rivers were getting dirtier, the poor were getting poorer.

Thus have I tried to begin to mend the conflicts of my parent’s marriage and my world with a poetic that I call Ecotropic, a joining of at least two words (Ecology and psychotropic) whose meaning I hope suggests a turning toward the hearth of the Earth. In essence, I try to reenact in words the numinous interrelationship of things that I see in nature. In so doing, I hope to more functionally reflect the true relationship of humans to their world and make of culture an inflorescence of God.